The Long-Term Effects Of Critical Parents. 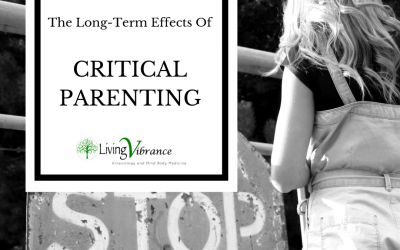 I wanted to talk to you all about this big theme I see in clinic.. And when I say big theme, I mean, it comes up VERY consistently in my adult clients as they’re on my table. It never starts this way, but many times the causal endpoint is this; critical parents and the effect they have on their children, now adult.

Usually these clients come into clinic wanting to work on something like stress, anxiety, tension, headaches, perfectionism. Looking a little deeper, it becomes clear we’re addressing underlying self esteem problems, feeling unworthy, not good enough, self sabotaging and they’re usually very critical of themselves (and others!)

Although these people aren’t coming to me in direct relation to their parents, I’ve been a Kinesiologist long enough to know how to pull the layers back. So like any good Kinesiology session, we follow the trail, and pull at the thread, more often than not the source is this. Either one or both of their parents have critical tendencies. Parents who have applied pressure on their children from childhood all the way through into adulthood; and, surprise! After years of embedded belief systems, I find these now adults on my table with all sorts of stress and beliefs that need to be defused and integrated, sadly, as a result of critical parents.

The Wedge That Divides.

The thing is, it’s hard to lay blame or palm off any responsibilities, as the intention is good, right? Parents simply wanting the best for their children, ‘helping’ them, ‘advising’ them, ‘guiding’ them in the right direction. It’s hard to take a firm stance on parental figures when they themselves don’t realise the result of their actions; especially after many years of such habits. The intent is good. The intent comes from a place of love. They want the best for their kids..

However, there is a fine line between being a guide, a support system and being critical and maintaining high expectations. In this day and age where checklists that were previously easier to attain such as property, career, a loving and loyal spouse take years longer to put in place and even harder to hold onto. It’s not the same now as it once was, and that gap between generations can sometimes be difficult for our parents generation to understand. We don’t simply finish our studies, meet a partner, move in together, start a family and buy a house for the cycle to start again. It takes so much longer, with many more setbacks, price-tags, obstacles, competition and choice.

Yet, that’s what critical parents have in mind when they try to help their kids. They believe we should be thicker skinned, that the new generation is softer, less driven and with opportunities they never had themselves. Adding to this disparity is that of course, as people get older, they tend to become firmer in their beliefs and have more difficulty accepting other perspectives, lifestyles and beliefs.

The Damage Is Done, What Now?

So what happens when you’re the child of said parents? Is it possible to communicate? To convey your perspective of the world, having your words land on the mark? To be heard and integrated? Well, that depends on your individual family and how it operates. The future of your relationship is a result of both parties’ receptiveness and willingness to shift and change patterns- for the long term.

It is on your end however, absolutely possible to rewire your beliefs. To shift the way you receive ‘advice’. To fundamentally dissolve your need to maintain ‘top scores’ in order to feel good about yourself. Or conversely, to re-build a poor self esteem and appease that anxiety.

So how do you go about this? The first thing necessary is to explore past events; as well as the belief systems that have stemmed as a result.

Let’s say, for example, you received a B in an exam when you were 12 years old. You showed your parents and they were less than impressed because you can do better. As a result, in the mind of a 12 year old, you’ve not only learned that you need to get A’s for your parents to be pleased, but may go as far as feeling unloved or unaccepted until you get that A.

That belief then lands on the mark and continues into adulthood developing into perfectionism tendencies, either to avoid feeling inner rejection or to maintain the feeling of love and acceptance. Never, really satisfied even when you’re “performing well:, because you’re still always chasing the feeling of being good enough.

(As a side note, if you love TED talks, Marisa Peer has a fantastic talk on being enough, I feel like she was the pioneer on the I Am Enough movement. )

So you see; we’re diffusing the past, we’re becoming aware of beliefs. Of our thought patterns, we’re diffusing and rewiring them into more sustainable ones. We’re building new foundations and boundaries for the future. Simple? Can be, even one session will shift and change your perception of yourself and the world around you. You just need to dig a little deeper.